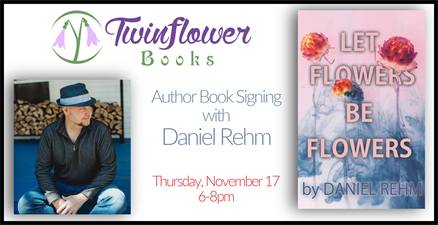 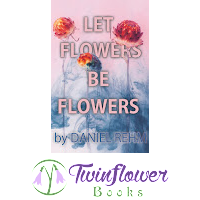 Twinflower Books invites you to the Book Signing with our own Daniel Rehm for his second release, Let Flowers Be Flowers. We will have a short introduction of Dan's new work, followed by book signings, then we will serve cake at 7pm.
About Let Flowers Be Flowers
An estranged family preparing for the annual Wisconsin gun deer hunt carries on completely unaware of how their lives were about to change forever. Motivated by greed and jealousy, eldest brother Mason Owens hatches a nefarious plan. He nearly thought of everything except the intrusion of an unknown hunter with stark raving blue eyes. When the dust settles, an historic scene sends shockwaves across the country and provides fuel for campfire stories for generations to come.
Read the Kirkus Reviews here
https://www.kirkusreviews.com/.../let-flowers-be-flowers/
About Daniel Rehm
Daniel Rehm is the founder of Rudbeckia Productions and the owner of Twinflower Books.
Daniel Rehm became a full-time writer after a long career in the paint and industrial coatings industry. Dan wrote Let Flowers Be Flowers between 2008 and 2011 and launched Rudbeckia Productions, LLC in 2020 to publish his work.
Dan’s writing includes various landscapes he knows very well – from the coulee area of western Wisconsin to the boreal forest of the Boundary Waters Canoe Area. He has enjoyed writing Let Flowers Be Flowers because he was able to explore both character development and bring to life the various relationships among men and their families. In addition, explore the sociopathic nature of a killer – what motivates a killer, what haunts a killer, and what purpose that killer believes he has in his life.
Dan lives in North Branch, MN with his wife and four children.