Movie and Music; A MAN THERE WAS and the Poor Nobodys 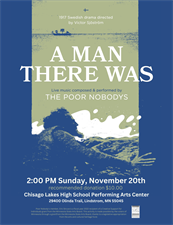 Based on Henrik Ibsen’s epic poem and directed by Victor Sjöström, A Man There Was (Terje
Vigen) was released in 1917 when many Scandinavian immigrants were arriving in Minnesota.
The film tells the story of a Swedish sailor who takes on a British blockade to find food for his
family. It is considered to be one of the finest examples of Swedish silent film.
Suggested donation $10; no one turned away. The event is hosted by The Friends of the Karl
Oskar House and the Chisago Lakes Chamber of Commerce. For more information, call 651-
253-3373 or 612-229-9737 or email FriendsofKarlOskarHouse@gmail.com or
poornobodys@gmail.com.
About the Artists
The Poor Nobodys have been composing and performing since 2008. They’ve written many
original scores for both classic and new films, including Night of the Living Dead, Douglas
Fairbanks’s The Black Pirate, and Alfred Hitchcock’s The Lodger. They have collaborated with
venues such as the Trylon Microcinema, the Southern Theater, and the Cedar Cultural Center in
Minneapolis; the Minnesota History Theater in St. Paul; the Ark Center for the Arts in Viroqua,
Wisconsin; and many other venues in the Midwest and beyond. In 2014, a European tour gave
the group the opportunity to perform in cafés and theaters in Germany, Belgium, the
Netherlands, Switzerland, and France.
Poor Nobodys member Eric Struve is a fiscal year 2022 recipient of a Creative Support for
Individuals grant from the Minnesota State Arts Board. This activity is made possible by the
voters of Minnesota through a grant from the Minnesota State Arts Board, thanks to a legislative
appropriation from the arts and cultural heritage fund.
Movie and Music; A MAN THERE WAS and ...